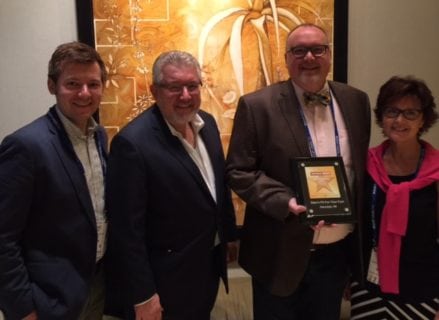 Stan’s was featured in the September/October 2016 issue of Footwear Insight along with 61 other stores that were recognized as winners of the prestigious Gold Medal honors.

“Customer Service is the best way that independent shoe stores can win out over bigger stores and online competitors,” said Mark Sullivan, editor of Footwear Insight, one of the a leading trade publication serving the footwear industry. “It’s also the best way stores can take care of their customers and build a loyal following.”

The Gold Medal Awards are presented to stores that earn a score of 70 or better based on the results of a mystery shopping evaluation authorized by Footwear Insight and conducted by an independent third party mystery shopping firm. Stan’s achieved its recognition by earning points on 24 different criteria involved in the shoe buying process, starting with “how promptly were you greeted,” to the measuring of the shopper’s foot, all the way through the check-out process and the quality of the bag the shopper received on the way out the door.

“Stan’s should be very proud of their achievement and prouder still to share it with their shoppers and their community,” Sullivan said. “We evaluated more than 120 stores and those that made the list represent the absolute best of those stores.”

Stan’s Fit For Your Feet is locally-owned and operated. They have been in business since 1950 and specialize in quality footwear from around the world. Stan’s three stores are home to Wisconsin’s largest collection of regular and hard-to-find shoe sizes. In 2013, the National Shoe Retailers Association named Stan’s Fit For Your Feet and New Balance Milwaukee the National Footwear Retailer of the Year. The company was also named one of Southeastern Wisconsin’s Top Ten Businesses of the Year in 2014 and Best Shoe Store by Shepherd Express in 2014. Since 2008, Stan’s and New Balance Milwaukee have been named Milwaukee’s Best Shoe Store on WISN’s A-List. For more information please visit www.StansFootwear.com or www.NBMKE.com.