Each year, Walt Disney World® Marathon Weekend brings athletes to Florida for four fun races. Runners glide through Walt Disney World® Theme Park, meeting well-loved Disney characters along the way, in what is called “the most magical race on earth!”

Kelly Hendrix, manager of New Balance Milwaukee in Greenfield, has run the Disney Marathon and Half Marathon before, and this year, she participated in both to honor her first Disney races with a beloved friend 10 years ago. 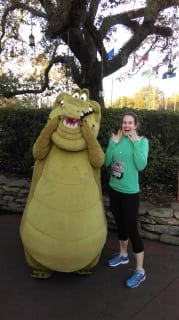 Kelly with Louis the Alligator at Mile Nine of the Disney Half Marathon.

“If you think 26.2 miles is hard, you should try chemo” was the simple statement on the back of a T-shirt I saw while running the Disney World Marathon this past weekend. The caption hung above the photo of a little girl named Caitlin. She had wires and tubes all over her, and she had a pink bow covering her bald head. What struck me most about the photo was the giant smile on her face. I spoke for a few moments with the man running ,and he said Caitlin was the “strongest person (he) knew hands down, present company included.” We were surrounded by seasoned marathon runners and people who are known for their strength and conditioning.

I ran the next couple miles looking around and thinking about the different reasons people do the things we do. Thinking, ‘What inspires you?’ I slowed down and began talking to other runners to find out why they were there. The people towards the front of the race were there for no other reason than to run; they were there to get a personal best. They eat, sleep and breathe running. Towards the back of the pack of more than 20,000 runners, I spoke with Leonard, who was running the marathon on his 70th birthday “to see if (he) would survive it.” He did. I saw him with his daughter at the finish line. I spoke with Mary, whose sister passed away the previous year. She and some friends were raising money for the family by fundraising per mile they completed as a team.

The reason I was crazy enough to run 39.3 miles, a half marathon Saturday and a full marathon Sunday, after seven years of not running in any major distance races, is because it was the 10-year anniversary of the first time I went to Disney to run the Half Marathon with someone who would become my personal hero.

In 2005 I had the honor of running the Disney World Half Marathon with Rick Davis, a stroke survivor. During our year of training I watched him struggle with the complete paralysis on his left side. He could neither pick up his left foot nor swing his left arm to help his running. I broke into tears, along with everyone else, when he ran across the finish line at 13.1 miles in just under four hours, which was what it took him to walk three miles when we first started training. 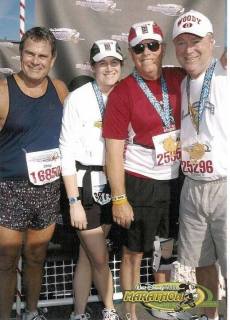 In the 10 years I’ve known Rick and his family, he and his wife Nancy continue to inspire me with their way of thinking and living. Although he is still paralyzed on his left side, he and Nancy travel extensively, spending time with friends and family around the world. They constantly have a sunny outlook, even when life is challenging, and end every Facebook post, even the ones talking about his recent surgeries to repair a torn quadriceps tendon, with “Life is good.”

I wanted to honor his struggle and celebrate his achievements by taking part in the race that was the first major step back towards regaining his strength and health after his stroke. Being back in Disney brought back all the memories I made the first time, and I felt Rick’s spirit with me through every mile.

As I crossed the finish line after running 39.3 miles, I flashed back to 10 years ago crossing the same line with Rick. I temporarily forgot about all the stress and strain of daily life, and I forgot about the pain in my body that inevitably happens with aging. Instead, I thought “Life is good.” 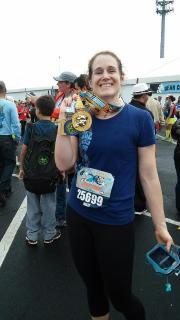 Kelly at the finish line of this year’s Disney Marathon.

WOW..just WOW! Beautiful. We are reading this while driving back to Ten Mile and tears running down our faces. We often comment how you changed our lives and to think we changed yours, too, is amazing. Thank you, thank you. Sending lots of love. Life is good.

Nancy, working with Rick was one of the most rewarding experiences of my life. It led to many other races and achievements for so many others. You and Rick continue to inspire me to live my life to the fullest. My life is richer for knowing you both.
-Kelly