Sharing a Pair in Chiquimula

Megan and Ben Sajdak of Stan’s and New Balance Milwaukee are in Guatemala with Soles4Souls, a global non-profit that helps people in need throughout the world. They are fitting people with shoes collected by Stan’s Share-a-Pair shoe drive and Soles4Souls. 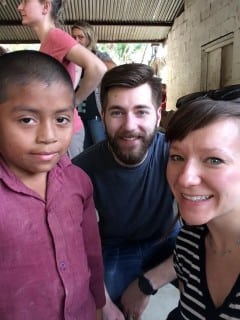 Megan and Ben Sajdak with a new friend.

After arriving late Monday night in the dark, we woke up to a new world Tuesday morning: green trees, sun shining, roosters crowing and the misty fog in the background rolling over the hills. 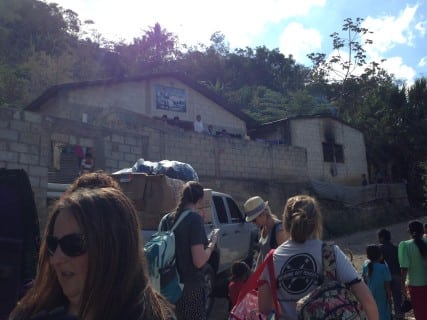 Stan’s and Soles4Souls prepare for their first fitting in Chiquimula.

Our first fitting took us on a 40-minute drive standing in the back of a pickup truck, 20 minutes of which was spent on mountain terrain – unpaved and extremely bumpy. We saw cows, stray dogs, kids playing on the streets and men with piled wood or hay on their backs. We arrived to Iglesias Evangelica, a local feeding center – women and kids all ready to receive us with smiles, giggles and “hola.”  It was fairly quiet as we were all unpacking the car, watching each other with interest.  Our team set up the shoes for the fittings, dividing our boxes into sizes, Kids 11’s, 12’s, etc. Approximately 300 kids and moms were fit! 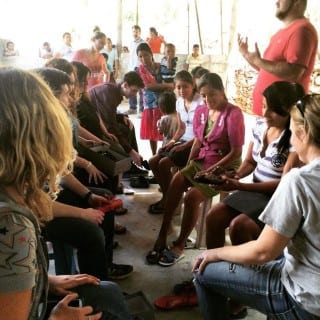 Stan’s and Soles4Souls fit people with shoes on their visit to a Chiquimula, a Guatemalan community.

The language barrier was at times quite difficult, but hand gestures, some poor Spanish and a few smiles later, we were able to complete our mission. Most children were shy, polite and very thankful. One older woman, 75 years old, came from higher up in the mountain village for shoes. Through some translation, it appeared she walked at least an hour barefoot to reach us. We later found out she also deals with cataracts, which impair her vision significantly, making her legally blind. Another younger woman came for shoes for her five children, ages 4, 7, 9, 13 and 15! 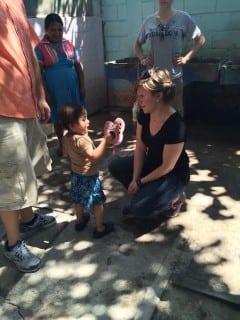 Every family we served lives in extreme poverty. Most nutrition for their children comes from tortilla. This tortilla, while tasty in moderation, is not enough to nourish. It’s sad to see so many people in need. A pair of shoes means footwear for them or a product to trade at the market for other needs.

Even though these families live in poverty, we saw so many bright and happy faces. The Guatemalan people have been so nice since we arrived…humble, blessed and extremely proud of their culture! 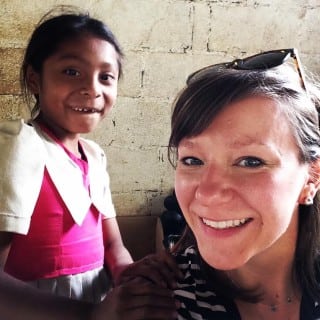 Megan and a young Guatemalan girl.

After the fitting was compete, we packed our belongings and ourselves to travel to our second fitting of the day.

An unbelievable experience we will not forget! 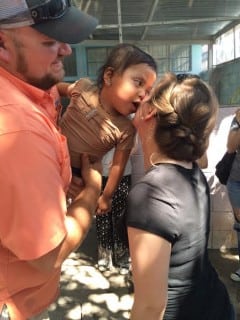 Megan receives a kiss from a young Guatemalan girl who just received a new pair of shoes.

Megan & Ben, this was a beautiful story, it made me all teary eyed. You both were so lucky to be a part of this, you make us all proud !! I’m sure you have made some “forever friends” !!